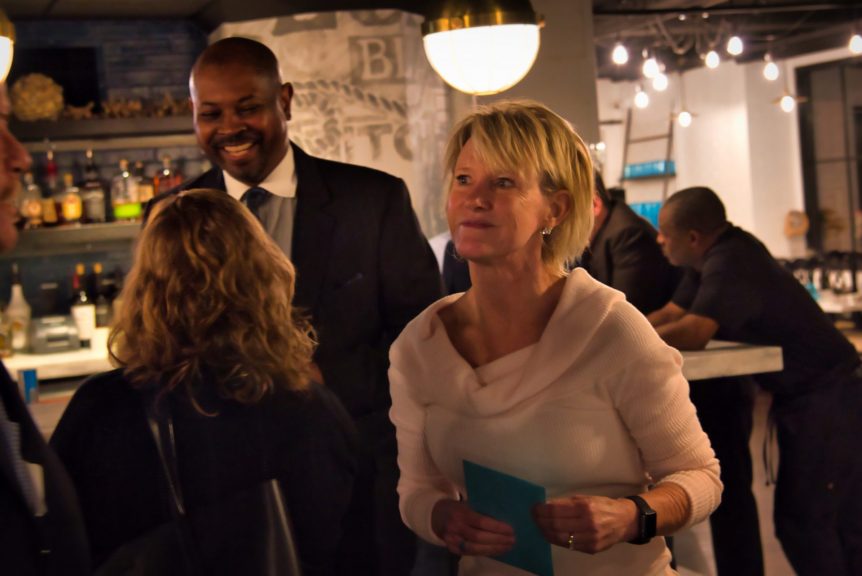 (Kate McShane is seen here last night at a ‘Farewell’ party given in her honor. Her successor, Jimmy Stewart, was introduced as well. He is seen here (left).)

Jimmy Stewart is the Project JumpStart has a new director. He took the reins in October, Kate McShane, JumpStart’s longtime director, retired after 10 years spearheading the organization.

“Kate has created quite a legacy, not only in this industry, but this entire town. There isn’t a politician, developer, foundation or commercial contractor in this region who does not know who Kate McShane is,” says Mike Henderson, president of ABC Baltimore.

While it may seem like an impossible task to replace McShane, she’s left Project JumpStart in great hands, says Henderson. “For starters, Kate recommended Jimmy for this job. That’s not too shabby. Moreover, he worked with her at Struever Bros in their role of building relationships with the community and subcontractors. And, Jimmy has spent the past 10 years running his own firm. So, he has first-hand knowledge of how all this works.”

“I have big shoes to fill as I follow up on the success and expansion that Kate McShane has created,” says Stewart. “I am looking forward to helping all parties. This includes improving the lives and construction careers of our JumpStart candidates and being of assistance to our employers with their project and workforce development goals.”

“I’m confident that with the addition of Jimmy Stewart, Project JumpStart is going to continue to do great things. Jimmy shares Kate’s passion for Project JumpStart and creating opportunity for the city’s underserved population,” says Henderson. To contact Jimmy Stewart or if you’re interested in hiring a JumpStart graduate, email jstewart@jumpstarttraining.org or call 410-851-0351 x115.